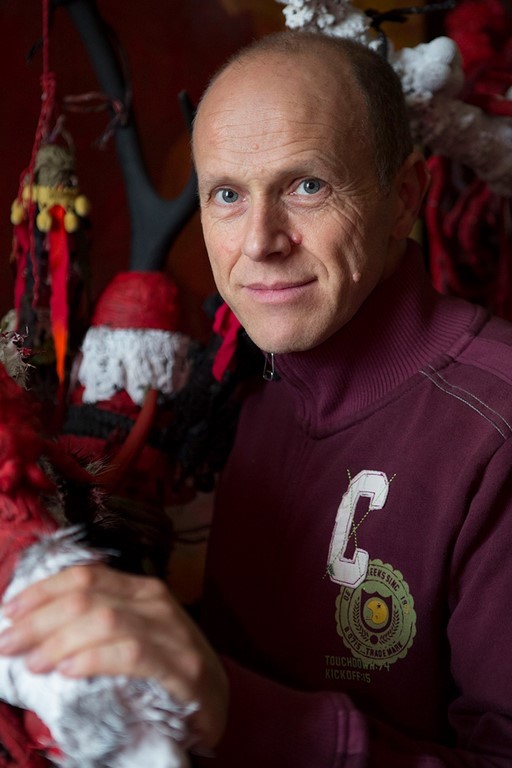 In his sculptural work, Benoît Huot (b. 1966 in France) invite us to unreal encounters with hybrid and colorful creatures. From recycled elements (jewels, textiles, stuffed animals, pieces of furniture), Huot creates baroque trophies and implements an original and flamboyant animism with vibrant color palette and sophisticated patterns. His haunted creatures come out of an enchanted world with its own magical language, its mysteries and myths.

Benoît Huot lives and works in France. Having graduated from the Beaux-Arts de Besançon (Besançon School of Fine Art) in 1989, he abandoned painting in the early 2000s to dedicate himself to a practice that oscillates between sculpture and installation. Fascinated by religious and primitive art, the artist, in an atypical approach, dresses stuffed animals in velvet, bandages and jewels, creating a world both strange and mesmerizing. These metamorphosed ani mals, like fetishes or creatures with shamanic properties, evoke the rituals of Asia and South America. The stuffed ani mals are no longer hunting trophies, but real chimera, fabulous, imaginary monsters. Thus dressed, in the style of reliquaries, wild animals become sacred creatures, characters from fables or fairy tales. Strong visions, some of his works can arouse a strange feeling, between anxiety and enchantment. In 2012 La Maison Rouge, hosted Benoit Huot’s first solo exhibition entitled “Au-dessous du seuil” (Below the Threshold), which constituted the recognition of his work on the contemporary art scene. There followed several solo shows, including “Bêtes et dieux, cortèges sacrés” (Beasts and Gods, Sacred Processions) at the Musée des Beaux-Arts de Belfort (2013). Between 2015 and today, Huot participated in various group exhibitions in European cultural and artistic institutions.