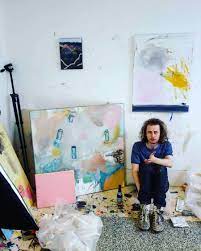 Despite his young age, and despite being part of a generation of fast-paced ‘digital natives, Geert Marijnissen’s practice as a painter comes across as being remarkably slow, characterized as it is by unceasing, consistent contemplation. Even though his technique might seem careless, Marijnissen sometimes spends literally months crafting his paintings in his studio. He often repaints these images, whether recent or months or even years old, with several layers, thus constructing, deconstructing, and reconstructing past (and future) actions. That is why, in Marijnissen ’s work, the evidence of many preceding decisions filters through, and remains partly visible to the spectator. This slow approach of repainting is illustrative of his continuous oscillation between intuition and thoughtfulness, boldness and doubt lending his paintings a mature and elaborate depth as well as a tactile vulnerability.

Geert Marijnissen lives and works in Ghent. He graduated a Master at LUCA School of Arts

Ghent in 2017. He had his first solo at Waldburger Wouters in 2019, the same year he was part of Salon de Peinture at M HKA in Antwerp.