Odoteres Ricardo de Ozias was born on July 15, 1940 in Eugenópolis, a town near Muriaé, in Minas Gerais, Brazil. Nothing configured, as far as it is possible to be born an artist, that he would become the artist that a few lucky people will have had the chance to know in his lifetime.

He was the son of farmers working on a farm. He started primary school and learned to read and write, then worked in the fields before becoming a baker’s assistant in the city of Eugenópolis. When he was 20 years old in 1960, his father moved to Rio de Janeiro as a guard in the construc- tion sector. Over the years, his father managed to bring his entire family: wife, four daughters and five sons, including Ricardo de Ozias, who began working as a bricklayer. A few years later, he became a station agent and assistant to a special agent in the federal railway network. Then health problems forced him to “leave the field” to work in an office in the same company.

It is thanks to this radical change of life that he will start drawing, without any aesthetic or practi- cal education in the matter. Completely self-taught, he began by drawing caricatures of his colleagues before being “spotted” by an engineer from the federal railway network who asked him to draw the illustrations for the book “Madeiras da Amazônia – identificação de 100 Espécies”, published by the company. Without any previous experience, Ricardo accepted and ventured out with coloured pencils, hydrocolor pens and paper that were provided to him, as well as small wood samples.

He had to reproduce the typical colour and grain of each wood, a task to which he devoted himself with interest, although it seemed difficult to find the exact colours. For the first time, he had to exper iment with various mixtures of colours, or even with dust added to the drawing and fixed with pencils, to get the exact shades.

This was the first experience of a “professional draughtsman reproduction” that OZIAS had with a commission on a specific subject. It is undoubtedly at this period that it crystallized its desire to paint as well as palette of mixture of colour that it will make evolve its style in that which we know today.

The only thing that will remain is the wood in the form of an insulating plate, the colours, his fingers, fingernails and teeth instead of the pencils, markers, brushes and other artistic materials generally used.

His short career was rich in artistic collaborations during the following years, either solo or with other mainly naive artists in various museums, embassies, residences and public commissions. It is thanks to various catalogues “The Devil’s Beauty” published by Serie Monde, “Return to Brazil- ian and Haitian Naive Art” published by the Brazilian Ministry of Foreign Affairs, “Playing with Naive Colours” published by the Brazilian Ministry of Culture, and so many others that one realizes the richness of his work and its influence on the Brazilian Naive art scene and beyond.

His works are still today of a rare topicality and accuracy for a self- taught artist that the genius of his main patron Lucien Finkelstein, founder of the M.I.A.N., was able to see.

It is for these reasons that we have decided to pay posthumous homage to this friendship and these extraordinary personalities by presenting, among the last works purchased by Lucien Finkelstein before his death in 2008, 11 works by OZIAS created between 1999 and 2002.

We discover a confidential artist, still little known by the European public, an artist with a unique universe. The perspective exists only in juxtaposed plans but without notion of scale.

The colours are clear and clean, like flat areas, despite the fact that they are painted with the fingers, and their juxtaposition gives them a texture and depth quite different from the oil paintings we usually see.

But it is, in my opinion, especially the joy that radiates from all these works that makes her work so magical.

All figurative, they take us instantly to a place that seems as familiar as it is magical, simply placed in front of us so that we can feel good. All these elements that are part of his daily life and that of the Brazil of his time between African-Brazilian religious rituals, peasant life 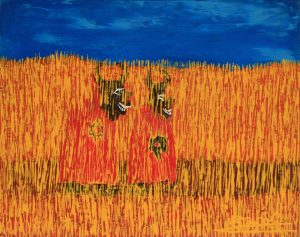