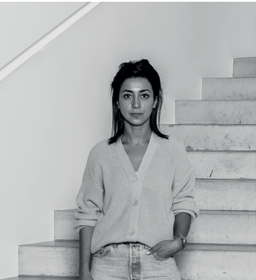 Sahar Saâdaoui was born in 1986 in Brussels, where she lives and works.

She graduated in Textile Design at the Royal Academy of Fine Arts in Brussels. Inspired by the familiar gestures of sewing, she rigorously investigates her interest in fabric and paper. In 2014, Sahar Saâdaoui developed her practice during her first residency at TAMAT (Centre de la Tapisserie, des Arts Muraux et des Arts du Tissu) of the Fédération Wallonie-Bruxelles. In 2016 she was a resident at WIELS (Centre for Contemporary Art) in Brussels and at L’ACADEMIA BELGICA in Rome. In 2018, she was the laureate of the Louise Dehem Prize, awarded by the Royal Academy of Sciences and Letters of Belgium. She took part in the exhibition Dans l’intimité des crinolines, as part of the Young Artist Prize of the Parliament of the Fédération Wallonie-Bruxelles.